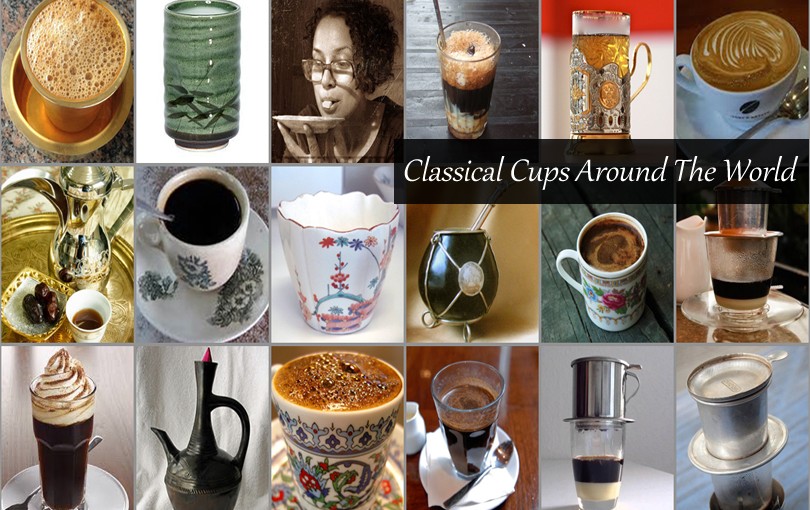 Here are types of mugs in various countries

Filter coffee is famous in India. This coffee is served in a dabara tumbler, in such a way that the tumbler with coffee is placed on a broad mouthed dabara. The decoction for the coffee is made in a separate filter, then the boiling milk and sugar are added to the decoction. They are well mixed, frothed and cooled by pouring back and forth in the dabara and tumbler.

In Ethiopia, first the coffee beans are roasted and then grinded using a simple tool called mookecha. The ground beans are boiled in a pot or flask called jabena to prepare coffee. Then the coffee is served in a thimble sized cups called cini.

Green tea in Japan is usually referred as matcha. Japanese tea cups does not have handles. There are two types of japanese cups, “yunomi” and “chawan”. Yunomi is tall cylindrical cup that is used in a daily basis for drinking matcha at home or at work. But chawan is a wide bowl and is used in traditional gatherings.

Indonesians use glass instead of cups. Their method of preparing coffee is very simple. Finely grounded coffee, sugar and boiling water is mixed in a glass to let the collision occur and then allow it to sit for 2 minutes. After 2 minutes the coffee is ready and without disturbing the settled mud, the coffee should be sipped from the glass.

Turkish coffee is more popular in Gulf countries. The coffee grounds, sugar, milk, cardamom etc  are added to cold water in a cezve and then boiled. A strong brew is extracted and served in a demi-tasse cups by pouring the extract in such a way to preserve the foam on top.

Yerba mate is a vitamin packed green tea prepared in Argentina. It has a smoky flavour that can be served hot or cold. This yerba mate is usually served in a traditional gourd cups.

In Vietnam, coffee is brewed using robusta beans in a metal filter called phin. This phin is placed upon the glass. In that glass large amount of sweetened condensed milk is placed and above that the strong brew is poured. This concoction is then mixed and served. It is served both hot and cold. If hot coffee means, they will serve the glass by placing it in a bowl of hot water to keep it warm as it filters. Orelse ice is added while mixing and served cold.

Viennese coffee is prepared by just adding grounded coffee in hot water. It is usually served in a tall glass on a tray with whipped cream and cinnamon powder on top of it.

Australians usually have “aussie flat white” which is adopted from the French caffe latte. They prefer drinking milk based coffee instead of black espresso. This milk based coffee “cappuccino” is served in a cup and saucer.

Several types of black leaves are brewed separately and mixed to prepare a Russian tea. It is served in a glass called staken. This staken is placed in podstakannik (tea glass holder), a holder made of metal with a handle. It is used to hold a hot glass of tea that is served right after it is brewed.

Arabic coffee is served in small cups that should not be filled all the way. Usually roasting, grinding and the entire making process is done in front of the guest. The one serving coffee will keep an eye for the empty cups and pours the coffee until the guests stops them by holding the hand over the cup.